There is a lot of talk about big data and data mining. It’s all good stuff as people try to get control of their data stream and monetize it. The current state seems to be organizational — put it in a form that people can read and identify issues. This is a huge step forward.

What do you think about mining information in people’s minds and organizing it in a way that makes sense? I’m not talking about mind reading, just involving a lot of people in the decision-making process in order to find the best solution to everyday problems. You could involve employees, customers, prospects, and etc. Here is how it works…

Once you have the top 10 or so solutions from the group, combine it with the ten you started with and pick the one that makes the most sense –the best decision. 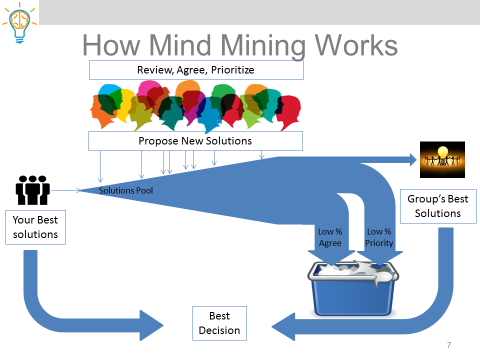 When we started thinking about text analysis, one of the issues we discussed was sentiment analysis. Lots of people have tried to figure this out and some companies claim a pretty high success rate using algorithms or other techniques.

Our feeling is that language is so complex and that the subtleties of things such as sarcasm make it really difficult to be very accurate. So we took a different approach to the problem. What if we leave the determination of sentiment up to real humans? If we do that, it simplifies the task to finding which comments to read.

CloudMR’s patent-pending algorithm sorts a list of comments in priority order. The comments most likely to resonate with other respondents are sorted at the top. If you want to know sentiment, just read the top comment for yourself. If you are feeling really energetic, read the first ten. Sentiment problem solved…

It is pretty clear that power has shifted from large marketing organizations to consumers. The McKinsey Quarterly calls it, a “tectonic power shift toward consumers” (David Court, Dave Elzinga, Susan Mulder, and Ole Jørgen Vetvik, “The consumer decision journey,” mckinseyquarterly.com, June 2009). There is a lot of room for conversation around WOM advertising, WOM spread, influencers, and media types. In all of the conversation, one factor seems to be a constant — the message itself is key to a successful word-of-mouth program. In order to be effective, a great word-of-mouth message must…

So how do you get such a message? Is it a message that can come from inside the four walls of your marketing department? I don’t think so. Certainly some sort of customer input is called for here. Traditional market research is one proven method to get the proper sample and results for your WOM campaign. There are also some new tools that help both researcher and marketer to understand what people are saying such as the many social media monitoring tools available today.
One thing that might help focus the results is a blend of research and social monitoring. This might cut out all of the extraneous information and help marketers focus on the main question, “If you were going to recommend abc company, what would you say?”
The response to this question, along with some segmentation information, can take you a long ways toward the message you need.

I tried Questions a few days ago and wanted to give myself a little time to think before responding. It seems like a good step on the surface but it seems like market research issues are always in the details.

Facebook limits me to 10 answers which cuts out my favorit eleven-point scale (zero to ten). That is not even the bad news. The user experience is probably something that most researchers won’t like.

My test using a ten-point scale only showed part of the question on my wall and only three of the ten answers showed. I think that is a problem when we want to get responses from people based on their initial response. Questions require respondents to do something before they can even read the entire question or see the entire answer list. I’m just not comfortable with those results. How do you feel about that?

A couple of weeks ago we looked at some of the largest Facebook pages to see how administrators are using them for their brands.

We also classified each post by type (question, promo, etc.). For this analysis we just compare engagement percentages for questions versus all other types of posts.

Is anybody surprised that engagement seems to be much higher for posts that ask the community to answer a question? Engagement rates were less than 1% for all of the posts we tested. Here are the engagement percentages for the ten pages we looked at…

Just for comparison purposes, we checked a page that we know gets good engagement – mint.com’s Facebook page at http://www.facebook.com/mint and find that they get .09% engagement from questions that they post quite frequently. Despite the low numbers, it looks like questions get about two times as much participation as other types of Facebook posts.

What is your page’s engagement percentage? Which types of questions get the best response?

Lots of engineers around me are talking about sentiment analysis. Most of the market researchers I know are more than skeptical about it. I can see the allure of some sort of magical box that will automatically make sense of all of these verbatim comments, but for me it doesn’t really matter. Just give me the handful of comments that resonate with most of the respondents and I’ll read them myself – sentiment and all. That is what is so exciting about some of CloudMR’s early testing of their proprietary algorithm. It doesn’t include fancy text analyzers or extra complexity. It quickly generates a score for each comment and sorts them. Interestingly the early models stratify the comments and group like ideas all together. Since I can easily see that grouping, the algorithm is clearly doing something right and producing the top ideas. It will be fun to see this implemented over the next few weeks. Jeffrey Henning has an interesting post about this same issue from last summer.

We are looking at Facebook pages to see how leading brands use them. Initially, I looked at just the top 10 pages based on number of fans to see what they are doing. I got the list from Ignite Social Media‘s blog. The pages I looked at today…

This is not a scientific poll (yet), just reading the first page to see what Facebook administrators have done recently.

Not surprisingly, all ten of these pages include some sort of self promotion including offers and positive statements about the brand. Several do a pretty good job of including other useful information such as announcements (Facebook), clever and fun conversation (Starbucks, Oreo, Disney, Skittles, MTV, and Converse All Stars).

Five of the top ten involve their communities by asking questions. Only Facebook asked a question designed at really getting input (via a poll). YouTube, Coca Cola, Disney, Skittles and MTV asked a question in a conversational way, sometimes not even expecting a response.

Smaller brands are getting much more out of their Facebook communities by asking fans for feedback and input on their products and services similar to market research, but not as rigorous. Even the market researcher in me can recognize the value in learning about issues from my brand’s Facebook community for follow up among a representative sample by my research vendor or internal department.

More details as they emerge over the next few days…

Since the data gathering on Facebook is so simple and fast, there is really no need to make the analysis overly complex. Expensive and complicated comment categorization software is not needed here. If your Facebook community is small or not very engaged, you may get everything you need by simply reading the responses. If you get more than 25 or so comments they can be tiring to read and more than 50 comments can be downright tedious as you can see from the tally from a question asked by Lowepro on their Facebook page.

CloudMR provides companies such as Lowepro and their agencies a simple and fast alternative that imports comments directly from the company’s Facebook page. The site provides an easy interactive way to look at the comments including keywords used by the community and the top responses based on top-of-mind mentions and “Likes” generated by the comment. You can explore the comments using a word cloud that filters your comments by demographics (among respondents who make them available). CloudMR is simple, fast and free for the first 50 comments analyzed.

Mint.com has an ongoing (and fun) conversation with members of their Facebook Community.

This activity drives further engagement among Mint fans and allows Mint to occasionally pitch a new feature without seeming like spammers.

TurboTax has a smaller, but very active Facebook community and used a fill-in-the-blank format for this question.

Many companies and their agencies have begun to realize the promotional and communications benefits of a Facebook page, but relatively few are using it as a research tool. Some brands such as Blackberry and CNN get great participation while ignoring the potential of getting feedback from their communities.

At the same time other brands such as TurboTax, Lowepro and Mint are taking full advantage of this chance to interact with the public. Administrators of these pages are actively engaging their Facebook communities in real, give-and-take conversations including skillfully composed questions, answers, clarifications and closed-loop feedback.

Participants don’t have to click a link, work through a traditional survey or even leave their Facebook wall – it’s invisible to them. There are lots of examples that I will cover over the next few months.

You are currently browsing the Text Analytics category at GroupInsight.